A development project lies in the outback of Guba Wereda, in the Metekel Zone of Benishangul-Gumuz Region, less than 40 km from the Sudanese border. It is unfortunate that Egypt and Sudan, the development project, the GERD, has turned into an epicenter of a political dispute that involved world leaders from Washington and Brussels up to Moscow. GERD has also become a staple topic in the leading international media outlets.

Now in its eleventh year, GERD is nearing completion after enduring numerous trials and tribulations since its beginning. The project has survived a grand corruption perpetrated by one of the contractors, the death of its Chief Engineer, several attempts of terrorist attacks, Diplomatic plots, and media campaigns to sabotage it.

After all, it is the only development project that became the agenda of the UN Security Council in the entire 75-plus years of the organization’s history. Last year at the session on GERD held at the UNSC, the Ambassador of Ethiopia to the US [who was Water Minister back then] said: “Ethiopia believes it is unfitting use of time and resources of the Security Council to discuss the GERD. We are dealing here with a hydroelectric dam. We are not building a nuclear plant.”

Ethiopia is the third most power deficient nation in the world. That situation would soon change within a few years. With GERD in full swing, power generation would double the current level. One of the major recurring complaints of investors, power shortage, will be solved. In turn, that would spur massive economic growth, especially in manufacturing, the main engine of economic transformation.

Despite suffering delays that caused extra costs, the project has remained on track and is now heading for success. Financed by Ethiopians, most of whom are living hand to mouth, GERD would be finalized in two years. Up on complication, it would generate 5150Megawatt of electricity which would entitle it to become the largest, more appropriately, the most powerful hydroelectric dam in Africa.

GERD is a world-class engineering wonder. There are other African dams bigger than GERD in terms of the structural size of their reservoirs, but none of them beat it in its power output capacity. Even though GERD’s reservoir would be 2.5 times smaller than that of the Egyptian Aswan High Dam [AHD], It would produce almost 2.5 times as much electric power as AHD., currently the dam with the output of the biggest amount of electric power in Africa. It is shameful and outright greed for Egyptians to cause such an outcry against Ethiopia’s dam for using so little water relative to what Egyptians use at AHD. The shame and selfishness become naked when one remembers Ethiopia is the source of 86% of the Nile water, while Egypt contributes nothing.

So far, the GERD project has passed at least five milestones that mark a turning point in its hectic progress over a decade. The first one was the advent of political reform in the Ethiopian leadership in 2018, which saved the project from a catastrophic fiasco from the grand corruption network. The second is the ‘GERD debate’ between Egypt and Ethiopia at the UN Security Council, where the Egyptians and the Sudanese diplomatic plot to deny Ethiopia its rights for development was foiled. Ethiopians used the challenge to their advantage to adequately explain to the world why they building GERD and what it meant to them.

Another milestone was the start-up of the first turbine of the GERD last February to produce electricity. Last but not least, the first and second fillings of the dam were the other important milestones of GERD. On 20 July 2020, the first filling of the dam was conducted and the following day was like a national holiday. The GERD news came almost as a surprise, causing Ethiopians to dance in the streets and honk their vehicles. The first filling was performed despite Egyptian saber-rattling and a warning of the then US president, who unashamedly took sides with Egyptians, pushing Ethiopians to sign a deal he cooked with Egyptian recipe.

Almost exactly a year later, on 19 July 2021, came the news of the second filling of the GERD. It followed the much talked about GERD session held at UNSC on 8 June 2021. It is worth reminding here that the US and the EU have taken sides with Egypt to denounce Ethiopia’s second filling.

Nevertheless, the success of the second filling without causing any of the much talked about doomsday scenarios confirmed that all the fears expressed by the media and politicians of Egypt and Sudan were baseless and untrue. Even, some leading independent Arab media outlets have criticized the politicians for the hoax they fabricated out of the second filling of the GERD reservoir. They did this to create media and diplomatic pressure against Ethiopia’s plan to execute the filling process.

The Arab Weekly, a UK-based news media, published an article four days after the second filling criticizing the Egyptian politicians and media. “Over the last few days, Egypt has used hyperbole to prepare the international community and Egyptian citizens for catastrophic scenarios. These included the risks of heightened political tension and water shortages. Some Egyptian media even went as far as to claim that the second filling of the dam would trigger a water bomb that could explode at any time However, none of this happened. Egyptian observers were relieved by the quick ending of the dam’s second filling, but their grave warnings were wrong and arose from a lack of key technical information. By announcing the completion of its second-year target for backing up water in the dam, Ethiopia has defused the crisis with both Egypt and Sudan,” wrote the news media.

Almost a year on, we are back to the rainy July, the month of the filling.- the third July in a row. Unlike Sudan, Egypt, the US, EU, mother nature is still on the side of Ethiopia. The meteorological forecasts have already confirmed that there would be more than adequate rainfall in the highlands of the Abbay basin. That means Ethiopia can achieve the target set for the third phase filling of the GERD without affecting the water flow to the downstream countries.

The third filling would prove to all, friends and foe, that GERD is a reality, and its finalization is clear as day. Sadly, Cairo and Karthum are not dealing with the matter as a reality and cannot be undone. Instead, they are still going against the tide and struggle to undo the irreversible change in the Nile politics by plotting with terrorists to destabilize Ethiopia and sabotage the dams project progress.

Two months ago, there well a coordinated attempt to instigate inter-religious clashes across the nation stretching from Gondar in the Amhara region up to the Selte Zone in Southern Nations Region. Then came the strings of horrific terrorist massacres of civilians in various parts of the country, especially in the western corner of the country where the GERD is located. Moreover, the Sudanese military regime unleashed unprovoked military aggression against Ethiopia and cried out to the international community as a victim. All these incidents are hostile actions against Ethiopia are jointly masterminded by the military regimes in Cairo and Sudan.

Egyptian and Sudanese leaders have to embrace the new reality. and make themselves ready to fit into it. Instead of being driven by paranoia and thinking of evil ways to sabotage GERD, they should start thinking of ways of sharing the bounties of GERD along with their African brothers in Ethiopia. The blessing GERD brings to the countries of the Nile basin goes beyond the supply of cheap renewable clean energy.

As a result of GERD, a lake wider than Greater London or 3.5 times larger than Washington D.C is in the process of formation. Perhaps, Egyptian investors could come to build resort hotels along the beaches and islands of the 240km long Lake Hedase [the reservoir of the dam]. Sudanese may do the same or would prefer to engage in the development of river transport services or the fishing industry. GERD is a symbol of common purpose and national pride for Ethiopians, and it also practically demonstrates the importance of the spirit of Pan-Africanism among the children of the Nile.

Here are the remarks the Ethiopian Premier made last February after switching on the first turbine of the GERD: “GERD is an opportunity for all countries in the region. No one is a loser because of the finalization of GERD. The water will flow, and the dam will not affect the lower stream countries. All that was said about Ethiopia seeking to prevent the water flow is untrue. Rather, we seek integration and real partnership among the three counties.” 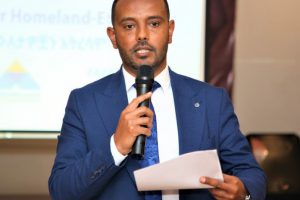 Ramping up tourism in Ethiopia

The dividends of the Pretoria peace deal